Pile up: St Louis inner-ring and one of its largest suburb, University City’s elder residents are ready to forget the devastating flood

Please set your items out to the front curb of your property for collection.

It has been just over two weeks since a torrential rain swept into the St Louis area. This tragic weather event that caused damages and condemnation in the millions, maybe billions.

Many storm drains and tributaries around the river city were overwhelmed causing floods in the county of St Louis.

University City, one of St Louis’ largest suburban areas, was hit the hardest. Just a few weeks ago, I had gotten the chance to speak with residents on the eastern end of town.

Yesterday, as I drove down Grant, Richard and Archer’s streets respectively, I noticed business was not as usual. Surely the trash can were being emptied but not the flood damaged items.

(Photos by The Newsletter 05)

I spoke with an elder resident and she declined to go on record. But she did state that she was sick of the pile up of furniture, electronics and toys.

As well as, damaged water soaked and molded mattresses and bedding within her perimeter.

She also stated she can’t sleep at night. Due to scavengers and junk men picking through the trash making a lot of noises. She guessed they were looking for something worth savaging or hoping to rob someone.

With FEMA coming out and talking to many residents of University City, and the condemning of many homes. It looks like things may be moving slowly but surely progressing.

But the woman that I’d spoken with said just please say a prayer for us. And I assured her that I would.

Moreover, I reached out to University City’s Refuse department and then noticed on the website all the information that the residents should be aware of. In addition, how do you get this information to the elders that do not have Internet?

Last, I am hoping that this helps someone and maybe they can pass it along to their neighbors. This was posted on the website, and it is maybe the reason why some items are still sitting on the curb side.

Please set your items out to the front curb of your property for collection. This collection is taking a lot longer than the normal bulk pick up.

Because the City has not regulated the amount of items a homeowner can put out to the front curb.

Due to the landfill regulations, we are not allowed to take electronics or hazardous waste.

With the extremely massive amounts of damaged items placed out at the curb it is taking the Sanitation Staff extra time to handle the items appropriately and effectively for the safety of our residents, staff and whole community.

The Public Works Department is asking for your patience on getting to all the items placed out for this special collection picked up.

If your items are set out after the truck has been through your street/area, the Sanitation Division will make a second pass through the city and that is when you will have your items picked up. 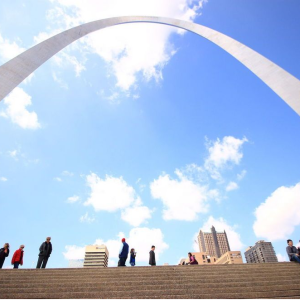 Major League Soccer pays homage to its new team St. Louis City in a drone tour, check it out!

Black to the future: A Black history primer on African Americans’ fight for equality – 5 essential reads

Once a quiet ferry landing on the east bank of the Mississippi River, this town burst with growth in the late 19th Century.
Tom O'Neil

Trace the steps of our ancestors, as we travel through time. Witness the struggles and triumphs of African Americans in the “Heart of America”, who played an integral part in shaping America’s story.
David Beckford

Why Do Holidays Take a Toll on Teen Mental Health?

The majority of Americans report the holiday season has a negative impact on their mental health, specifically citing increases in anxiety and depression.
David Beckford

Opinion: Dear Mayor and the power to be of downtown St. Louis

M ayor you need to clean up the downtown area it is truly an embarrassment to you and us all.
Anonymous